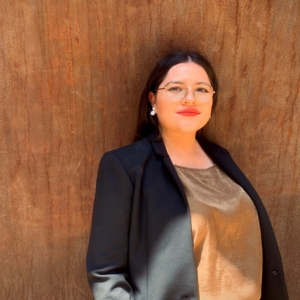 Ph.D. in Chicana and Chicano Studies
Class of 2021

Angélica Becerra is a queer immigrant artist, podcast producer & scholar of political graphics from Jalisco, Mexico. Her research focuses on the digital as a shift in the means of production, exhibition, and networking for contemporary Latinx artist-activists, and the ways artists form networks of care in digital space. She is the co-creator of the podcast “Anzaldúingit” along with Dr. Jack Caraves, where both focus on navigating life as queer Latinx individuals in academia. With over half a million listens, the podcast has been used as a teaching tool for underrepresented students and was featured in the 2019 Google Youth Tech Summit. Her artwork is primarily portraiture, with a focus on Black Indigenous and women of color activists. Her art has been featured in VICE and Latina Magazine and exhibited at the Los Angeles Design Festival and the Santa Cruz Museum of Art & History. Recently, she was a part of the Adobe Create Forward campaign and a beta tester for the Adobe Illustrator software for the iPad, her latest collaboration is a series of portraits for the Investigation Discovery channel, a part of #IDxPOV, a project to give voice to those who have been impacted by crime or the criminal justice system and whose stories are not typically heard.

View All
Scroll to top