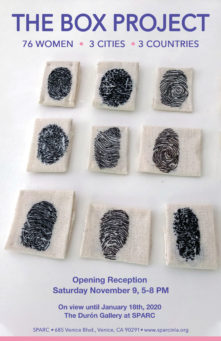 The Box Project originated in France with the Paris Women’s Salon, a group of creative women, who began getting together to talk about their work and support each other in their creative endeavors. This inspired the creation of its two sister groups, one in Mexico City and another in Los Angeles, which quickly grew with women wishing to participate. The women in Paris began sending small gifts in matchbox-sized boxes to their sister groups, and responding to this generosity, the women in Mexico City and L.A. sent gifts in return.

This exhibit will feature 76 women artists from Mexico City, Los Angeles, and Paris.

Exhibition on view through January 10th.

Gallery hours Tuesday-Saturday, 11 AM to 5 PM.

Cafecito with Ellie and the Profes