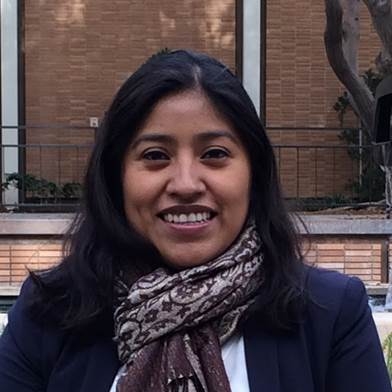 Brenda Nicolas is a Zapotec scholar and member of her community, San Jerónimo Zoochina. She was born and raised in Mid-City Los Angeles, one of the main hearts of the Oaxacan diaspora. Since she was a child, she has participated in Oaxacan folkloric (La Guelaguetza) and sacred dances back in Zoochina and in the California Indigenous Oaxacan diaspora.

As a PhD Candidate in Chicana/o Studies at UCLA, her dissertation, Zapotec Generations Across Settler Colonial Borders: Gendering Politics of Belonging and Identity, investigates how the experiences of U.S.-raised generations, and women’s participation in particular, are central to sustaining transnational migrant Indigenous communities, while challenging their racial categorization as Latina/o and/or Hispanic. She considers how the U.S. and Mexico have shaped, maintained, and/or reconfigured Indigenous racialization into a national imaginary that attempts to assimilate, silence, and eliminate Indigenous peoples. She uses oral histories of men and women among the first, 1.5, and second migrant generations. Brenda is a Ford Foundation Fellow and a University of California Office of the President (UCOP) awardee for her continued dedication to diversity, inclusivity, and mentorship for future scholars in higher education. She is also a UCLA Dissertation Year Fellow, a Eugene V. Cota-Robles Fellow, and a two-time Graduate Dean’s Scholar awardee at the University of California, Los Angeles.