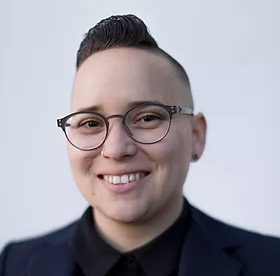 Jack is a gender non-conforming queer Latinx activist scholar who was born and raised in East Hollywood in Los Angeles. Jack received their B.A. in Latin American & Latino Studies and Politics from the University of California Santa Cruz (UCSC) in 2010. While at UCSC, Jack studied abroad at La Universidad de Chile, Santiago, and also participated in the University of California’s, Washington D.C. Visitors Program. In 2014, Jack received their M.A. in the César E. Chávez Department of Chicana and Chicano Studies at UCLA and currently, titled “Latinas Straddling the Prison Pipeline through Gender (Non) Conformity” which analyses the ways in which four Latinas are criminalized for their gender transgression in the inside and outside of the juvenile justice system.

Since 2015, they have been working closely with the TransLatin@ Coalition, a national organization dedicated to the improvement of quality of life for all Trans Latinxs. In 2016, together with the president of TransLatin@ Coalition, Bamby Salcedo, they released the report “The State of Trans Health: Trans Latin@s and their Healthcare Needs,” to bring visibility of Trans Latinxs in Southern California. Jack’s dissertation work centered on the experiences of Trans and gender non-conforming Latinxs and the role of family and spirituality in serving as spaces of empowerment and resistance. Jack earned their Ph.D. in 2019. Today, they hold work at San José State University as an Assistant Professor of Women, Gender, and Sexuality Studies, in the Dept of Sociology and Interdisciplinary Social Sciences.