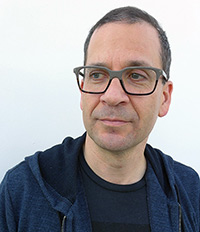 School of Theater, Film and Television

Chon Noriega has diverse research interests in film and the other arts; avant-garde film and video; the conjunction of film and television history; racial, gender and sexual difference within both alternative and national cinemas; and media access for underrepresented groups. He is author of Shot in America: Television, the State, and the Rise of Chicano Cinema (2000), and co-author of Phantom Sightings: Art After the Chicano Movement (2008), L.A. Xicano (2011) and a three-part study of hate speech on talk radio that uses social and health science methodologies (2011-12). He is currently completing a book length study of Puerto Rican multimedia artist Raphael Montanez Ortiz, and a longitudinal study of online and social media strategies among nearly 180 art museums in the United States. He has edited anthologies on Latino, Mexican, and Latin American cinema, as well as the collected works of Carmelita Tropicana and Harry Gamboa, Jr. Since 1996, he has been editor of Aztlan: A Journal of Chicano Studies, and he is editor of three book series and the Chicano Cinema and Media Art DVD series.

Noriega’s professional activities situate his research interests within a broader public framework. He has helped recover and preserve independent films and video art, including the first three Chicano-directed feature films. He is co-founder of the National Association of Latino Independent Producers (NALIP), established in 1999, and served two terms on the Board of Directors of the Independent Television Service (ITVS), the largest source of independent project funding within public television. He has also curated numerous film programs and art exhibitions. As part of the Getty’s “Pacific Standard Time: Art in L.A. 1945-80” initiative, he organized and co-curated “L.A. Xicano,” four interrelated exhibitions at the Autry National Center, Fowler Museum at UCLA, and the Los Angeles County Museum of Art in 2011-12.

Noriega is also director of the UCLA Chicano Studies Research Center, and adjunct curator at the Los Angeles County Museum of Art. As center director, he actively oversees the most extensive Chicano library and archival holdings in the United States, an academic press, and ongoing research projects focused on health care access, economic security, education pipeline, and commercial broadcast media. He serves on the advisory boards of the UCLA Center for Population Health and Health Disparities in East L.A. and the UCLA Kaiser Permanente Center for Health Equity.

His awards include the Getty Postdoctoral Fellowship in the History of Art, the Rockefeller Foundation Film/Video/Multimedia Fellowship, and the Ann C. Rosenfield Distinguished Community Partnership Prize. Noriega received his Bachelor of Arts degree in English from the University of Illinois at Chicago and his M.A. and Ph.D. in modern thought and literature from Stanford University.