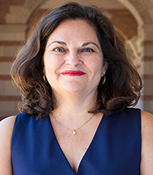 She rejoined the faculty of UCLA Law in 2011 after serving as professor of law and American studies at the University of New Mexico from 2005-10. Before that, she spent 12 years as professor of law at UCLA Law. She was a co-founder and the first co-director of UCLA’s Critical Race Studies Program.Prior to starting her career in academia, Professor Gómez clerked for Judge Dorothy W. Nelson on the Ninth Circuit Court of Appeals and worked as a legislative aide to U.S. Senator Jeff Bingaman of New Mexico.Professor Gómez teaches in the areas of race and the law, law and society, and she has taught three first-year courses: Civil Procedure, Criminal Law, and Constitutional Law. She has lectured widely and has published numerous articles, book chapters, op-ed commentaries, and books. Her scholarship has focused on the intersection of law, politics and social stratification in both contemporary and historical contexts. Her books include Misconceiving Mothers: Legislators, Prosecutors and the Politics of Prenatal Drug Exposure (1997), which is widely taught in law and society and gender studies courses, and Manifest Destinies: The Making of the Mexican American Race (2007), which is widely taught in ethnic studies and history courses.  In 2013, she published a co-edited volume (with Nancy López): Mapping “Race”: Critical Approaches to Health Disparities Research.Professor Gómez is the past president of the Law and Society Association (she was the youngest person and the first person of color ever elected), a multi-disciplinary organization of scholars who study law, legal actors and legal institutions in cultural and social context.  As an associate editor of the Law & Society Review, she worked to produce a special issue on law and racial inequality, published in 2010. She currently serves on the editorial board of Law & Social Inquiry, Aztlan, and she has in the past served on the editorial boards of SIGNSand Studies in Law, Politics and Society. She serves as a peer reviewer for many journals in the fields of law, sociology, ethnic studies, history, American studies, and gender studies, as well as for the National Science Foundation.She received an A.B. from Harvard in Social Studies (where she was a Harry S. Truman Scholar), an M.A. and Ph.D. in Sociology from Stanford University (where she had a National Science Foundation Graduate Fellowship), and a J.D. from Stanford Law School.