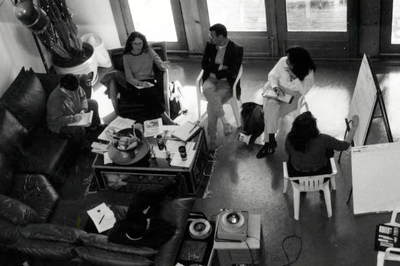 At UCLA, and in the wake of student organizing on and off campus, the development of Chicana/o Studies took the form of a research center established in 1969 and an undergraduate Inter-Departmental Program (IDP) established in 1973. These drew on the few faculty and courses from different departments and disciplines with a focus on Chicanxs to constitute an undergraduate major in Chicano Studies. UCLA is also noted for being one of the first institutions to provide a doctoral specialization focused on Chicanos within a traditional discipline–Chicano History within the United States field of the department of History. The UCLA Chicano Studies Research Center was also the base for one of the two significant national Chicano Studies journals–Aztlán–that helped establish the field and, for a period (1974-78), administratively supported the organization of the fledgling National Association of Chicano Social Scientists (now known as the National Association for Chicana and Chicano Studies).

The retrenchments in social and budget policies during the 1980s and the recession of the early 1990s left California higher education in a tight financial situation. Chicano Studies reflected this in lowered enrollments, majors, and graduates. Despite the establishment of a specialization/minor in 1992, and several attempts at re-organization of the curriculum, the Inter-Departmental Program at UCLA, like those at many other institutions of higher education, was in danger of being closed.

Student activism has always been an important component to the growth of Chicana/o Studies. In spring of 1993, students and faculty undertook civil disobedience, and a 14-day hunger strike to underscore their demands for greater support of the program and the establishment of a department of Chicana and Chicano Studies. The result of the subsequent compromise at UCLA was the development of a new academic unit–a center for interdisciplinary instruction (CII)–and six new full-time faculty positions within this unit. After campus and Regental approval, it was named in honor of César E. Chávez–in memory of his leadership for social change, fair treatment of farm workers, his support of nonviolence, and his use of the hunger strike as a tool to challenge the moral conscience of the nation and the world. This preceded along with a revival of programmatic and intellectual growth within Chicana and Chicano Studies in the late 1990s.

In 2021, the César E. Chávez Department of Chicana/o and Central American Studies is home to well over 600 majors and minors, over 30 PhD students, and 16 faculty members (five of whom are jointly appointed and hold only 50% lines in our department). The department attracts students who are not only brilliant, creative thinkers, but also deeply committed change agents intentionally seeking education to improve conditions for their families and communities. Department staff genuinely care about making students feel at home. Department faculty are nationally-renowned leaders in the study of Chicanas/os/xs, Latinas/os/xs, and Indigenous migrants from Latin America – uncovering inequalities, informing policy, and shining a light on these communities’ resistance, art, and history to inspire transformative change. This broad focus of study provides an inclusive venue for interdisciplinary community-engaged research, helping the department fortify UCLA’s public mission.

Indeed, the Department has a deep and long-standing record of community engagement with Latinx communities across the state. Not only are its faculty and PhD students creating new methodologies and epistemologies through groundbreaking scholarship, but the department is well-respected for this research in various community organizations across Los Angeles and the country.

Department graduates are the ultimate product of these efforts, distinguished by their commitment to academic achievement in the service of social justice. Students have received national fellowships from the Ford Foundation, the American Association of University Women, the American Association of Hispanics in Higher Education, the Center for Engaged Scholarship, and IUPLR/UIC Mellon Fellowship, among others. PhD alums are now assistant professors at California State University, Los Angeles, San Jose State University, California State University, Fullerton, Santa Monica College, Loyola Marymount University, SUNY-Binghamton, and employed as researchers at the Smithsonian and the Bright Research Group.